Duke Dimmock is a Greater Noble in the Geonosian hierarchy. He is always looking to maintain his station.

Duke Dimmock recently discovered that his rival, Duke Piddock, was involved in a deal with Teemo the Hutt. For some reason, Piddock stopped this deal and Dimmock began to pick up where Piddock left off. Curious as to why Piddock would suddenly end this lucrative endeavor, the Bothan infochant, Ota, was tasked with finding this information. 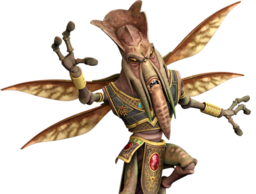