Overseer Brynn is a female Human who serves as an officer within the ranks of the Imperial Military. Brynn is assigned to command an Imperial spaceport control center in the settlement Mos Shuuta on the planet Tatooine.

Du Nahgg tried to pay Trex’s docking fees directly to Overseer Brynn in an effort to get her to release the Crimson Eclipse’s docking clamps. Unfortunately, Du Nahgg was less than convincing, but she served as a distraction while Soz Velik sliced into the spaceport control network and released the docking clamps on his own.

Overseer Brynn also guided in an Imperial Lambda-class shuttle while you were with her. Is she behind the Stormtroopers who chased you through the Mos Shuuta streets, or is something more sinister afoot? 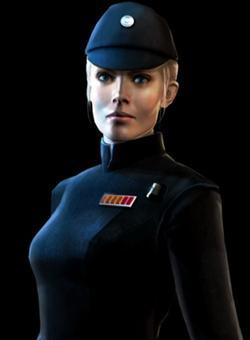