R5-D4 was one of the last droids produced in the low cost Industrial Automaton R5 line, a line plagued with malfunctions. As a result, R5-D4 was owned by many beings and in a constant state of used sale.

The droid eventually came into the possession of Chief Nebit’s Jawa tribe, that sold used droids to Owen Lars. Aboard the sandcrawler, the new arrival R2-D2 sabotaged R5-D4’s motivator, acting under the orders of Princess Leia aboard the Tantive IV to find Obi-Wan Kenobi by any means possible, even if it involved modifying other droids, an action usually prohibited by basic droid programming laws. Eventually, the sandcrawler arrived outside the Lars homestead. Owen Lars purchased the inexpensive R5-D4, but within seconds of the transaction, the droid’s motivator malfunctioned. After Lars accused the Jawas of selling faulty merchandise, the Jawas hastily let Owen have R2-D2 as a consolation.

R5-D4’s sandcrawler came under attack by Imperial Stormtroopers, and the badly damaged droid was picked up by another band of Jawas and repaired. It then changed hands once again in Mos Shuuta, being sold to Vorn Tel-Ovis, a local junk dealer, before being “liberated” by Soz Velik and his compatriots. Specifically, R5 feigned a major malfunction, and after Soz Velik narrowly missed clubbing Tel-Ovis over the head with a restraining bolt wrench, Theemin Cosmoswar tackled the junk dealer, Bao Bogo stunned him with his blaster, and Kira Sunrider put Tel-Ovis to sleep with a sedative. 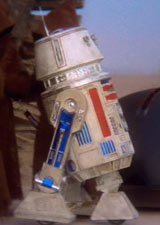