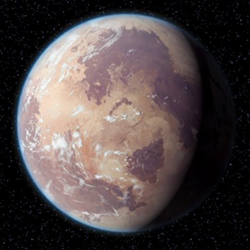 The planet gained the notice of the Empire in 35 GrS when a escape pod carrying two droids in possession of top-secret information launched from the starship Tantive IV and landed on the sandy Outer Rim world.

Due to the lack of surface water, many residents of the planet instead draw water from the atmosphere via moisture farms.

by: worboys
See All Pages